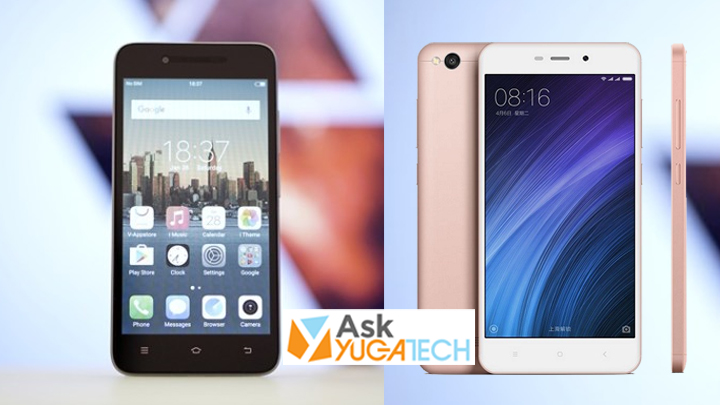 Budget smartphones are on the rise and with that come devices that offer decent specs for their price. Let’s begin!

The Vivo Y53 is the company’s budget smartphone that draws attention from the readers. It has a 5-inch IPS LCD display with 960 x 540 resolution, a Snapdragon 425 processor, a 16GB internal storage, a 2GB RAM, an 8MP rear AutoFocus camera with LED flash, a 5MP front camera with screen flash, and a 2,500mAh battery.

The Xiaomi Redmi 4A has been announced last month and is gathering fame from the readers. It has a 5-inch IPS LCD display with 1280 x 720 resolution, a Snapdragon 425 processor, a 16GB internal storage, a 2GB RAM, a 13MP rear camera with LED flash, a 5MP front camera, and a 3,120mAh battery.

For a budget smartphone, the standard nowadays is having a 720p screen resolution, however, the Y53 only carries 540p. This makes the Redmi 4A the winner in terms of viewing experience since both smartphones possess a 5-inch IPS LCD display setup. In my personal opinion, 540p screen resolutions do not belong in 2017 anymore.

Both smartphone have Snapdragon 425 processor with an Adreno 308 GPU. This chipset has been around for almost 2 years and can be considered outdated already. Regardless, this still gives budget smartphones a good performance in terms of daily tasks and application executions. As for their gaming potential, it can run light-to-moderate graphics games but don’t expect much when playing at the highest settings in moderate games.

The Redmi 4A has a higher rear camera resolution as compared with the Y53. The latter has a screen flash while the former does not have it. We have taken sample shots from the Y53 in which you can check out here, however, we do not have a unit for the Redmi 4A to take any photos.

The Y53 has a dedicated microSD card slot which attracts consumers since most of the smartphones nowadays have a hybrid sim slot setup. The Redmi 4A has an IR Blaster that can control remotes for TVs and a Gyroscope that can be used for Virtual Reality games.

We’re going with the Redmi 4A for this match because of its higher screen resolution, rear camera, and a larger battery capacity.Which budget smartphone will you get? Let us know your choice in the comments section below.