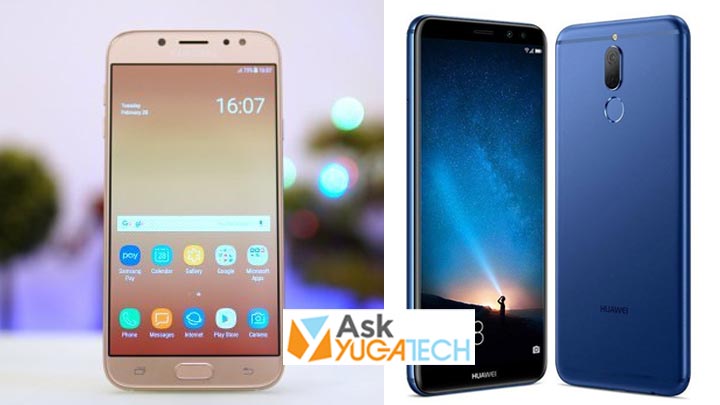 For this matchup, we have two smartphones with good camera features, but we will be tackling all main aspects in this comparison. Let’s begin!

See also  Huawei Nova 2i or Vivo V7 Plus?

Let’s check out their advantages:

In terms of display, the Huawei Nova 2i has the upper hand since it has a larger screen size but that will depend on users if they want a bigger-than-usual (5.5-inches) screen. It also provides a better viewing experience for users since it also has a wider aspect ratio (18:9) and higher screen resolution compared with the Galaxy J7 Pro. One thing to note is the J7 Pro’s Super AMOLED screen display which is not the usual choice for other companies to equip on their devices. To know more about screen types, click here.

For CPU, the Nova 2i has a Kirin 659 chipset which provides faster performance compared with the Samsung Exynos 7870 of the J7 Pro. Both of their GPUs, on the other hand, are the same so we can expect the same gaming potential.

As for the camera department, the Nova 2i has dual cameras in the rear and front. Meanwhile, the J7 Pro’s main feature is its camera features despite having single lenses on its front and rear sides. We have made a comparison for the Samsung Galaxy J7 Pro and the OPPO F3 and provided sample photos and videos for each smartphone (check the video here).

The J7 Pro has a larger battery compared with the Nova 2i. We can only deduce from now the factors that will be affecting their battery life performances: If both smartphones are given the same scenario where they are using same applications at the same time, J7 Pro would mostly draw less power since it has a Super AMOLED display and has lesser screen size and resolution. Nova 2i would most likely drain faster since it has a larger screen size and resolution.

Overall, the Nova 2i wins since it has a larger screen size, resolution, faster CPU, larger internal storage, and larger RAM. We cannot disregard J7 Pro, however, since it also provides a decent performance.

Which smartphone would you pick? Let us know your thoughts in the comments section below.

The only thing that sucks with Huawei Nova 2i ( I own one) is that you have to sacrifice 256GB expandable memory if you want to use the phone as dual sim. Hybrid sim sucks!

which one is fastest when it comes to connection on wifi?

i prefer with nova2i. since j7 pro has using super amoled display which is prone to screen burn-in that leaves permanent discoloration ..

How about with respect to durability/reliability? Which would you recommend?

It’s actually a tie since both are durable and have good after-sales experience.

Excuse me YugaTech, what mid-range phone or 15-16k phone would u recommend to buy with a great camera and good performance?
How about regarding about the camera only?

You can go with the Nova 2i

Thanks! I was thinking which one of these two phones should I buy, and this helped me a lot! Will buy nova 2i tomorrow xoxo

How to use the Globe at Home app (Postpaid and Prepaid)