A lot of readers ask, “Which is better, Samsung Galaxy J7 Plus or J7 Pro?” 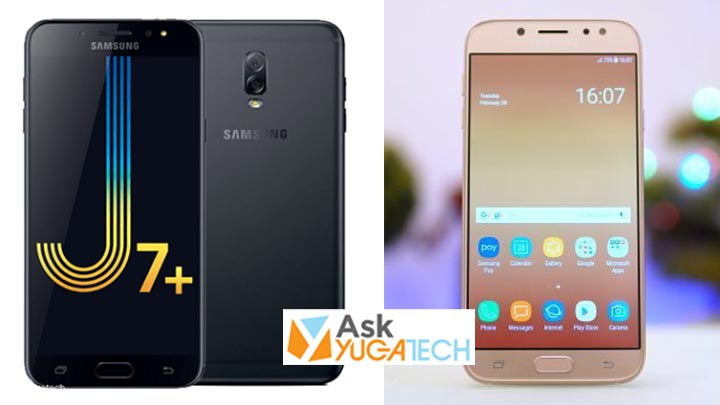 For the display department, both smartphones have the same screen resolution, display type, and size which mean that they both have good viewing experience for users. The Super AMOLED display gives good sharpness to its display since it provides darker blacks and brighter whites. Compared with the IPS display, it draws less power on the smartphone but it has a risk of burn-ins or the decay of pixel quality on the display over time.

For the CPU and GPU, The J7 Plus has a faster performance since it carries the Helio P20 chipset which has been proven in the Antutu benchmark score from our Sony XA1 review compared with the J7 Pro’s score from our J7 Pro vs OPPO F3 comparison review. As for the GPU, the Mali T880 of the former has a better gaming potential than the Mali T830 of the latter.

In the camera department, Samsung has added an additional lens to the J7 Plus. It also has a higher front camera resolution compared with the J7 Pro. As for the latter’s camera quality, you can check out our sample photos from the link that we have provided above. Since both smartphones are under the J7 series, we can safely assume that they both have good photo qualities.

For the battery capacity, the J7 Pro wins on this aspect since it has a larger 3,600mAh battery. We cannot test the battery life performance of the J7 Plus but based on its specs, there is a high possibility that the smartphone will give less battery life compared with the former one.

As for overall performance, we can say that the J7 Plus has the upper hand on this one and could prove that it is an upgrade from the J7 Pro. We must not forget that Samsung also added new features to this smartphone including the Samsung Bixby assistant and facial recognition which can be experienced on flagship smartphones from the company. The J7 Pro is not that bad but what we can say that it is a little bit overpriced for its specs.

What do you think? Which Samsung smartphone would you pick? Let us know your choice in the comments section below.