Home » Samsung Galaxy J7 Plus or Huawei Nova 2i?
ComparisonsMobile

Our readers ask, “Which is better: Samsung Galaxy J7 Plus or Huawei Nova 2i?“ 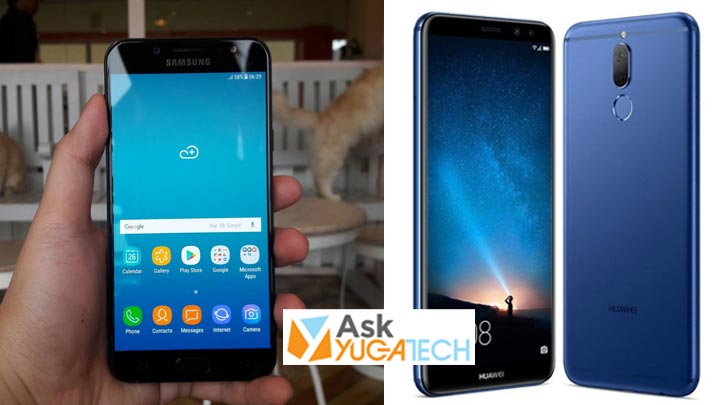 In this match, two new smartphones will be facing off to see who looks better on paper. Let the battle begin!

The Samsung Galaxy J7 Plus was released just recently and can be considered as an upgrade from the J7 Pro. It has a 5.5″ Super AMOLED display with 1920 x 1080 resolution, a MediaTek Helio P20 chipset, 32GB internal storage, 4GB RAM, 13MP + 5MP dual rear cameras with LED flash, a 16MP front camera with LED flash, and 3,000mAh battery.

In terms of display, the Nova 2i has a bigger screen size, aspect ratio, and higher screen resolution which means that it provides a better viewing experience to the users. The J7 Plus, however, has a Super AMOLED display, a common display type used by Samsung, but can deliver punchy colors and deeper blacks. You can learn more about difference smartphone display types here.

In terms of CPU and GPU, we will borrow the AnTuTu benchmark score of the Helio P20-powered Sony XA1 Ultra for reference and compare it with the benchmark score of the Nova 2i. The score that we got from the XA1 Ultra is 64,330, while the Nova 2i scored 62,964. Their CPU performance is relatively close if we base it on the scores but the Helio P20 has a better CPU performance for multi-core processing while the Kirin 659 is better at single-core. For their GPUs, the Helio P20’s Mali T880 performed better than the Kirin 659’s Mali T830, meaning that the former has a better gaming potential.

In the camera department, both smartphones have dual camera setups, however, the Nova 2i also has a dual camera setup on the front. You can check out some sample shots of the Nova 2i here. We’re yet to test the J7 Plus but we’ll update this post once we have our camera samples.

For their battery capacity, the Nova 2i has a larger battery compared to the J7 Plus. We cannot be sure yet with their battery life performance but the main factors that would be affecting them will be the display, CPU, and battery capacity. J7 Plus has an upper hand for the display since it has a Super AMOLED one which draws less power from the smartphone compared with the IPS display of the Nova 2i. Nevertheless, all will be cleared once we have reviewed both smartphones.

Overall, the Nova 2i wins in terms of viewing experience, but when it comes to performance, the J7 Plus has the upper hand. Both smartphones have their own advantages so users just need tock pick which one fits them best.

Which dual camera smartphone do you prefer? Let us know in the comment section below.