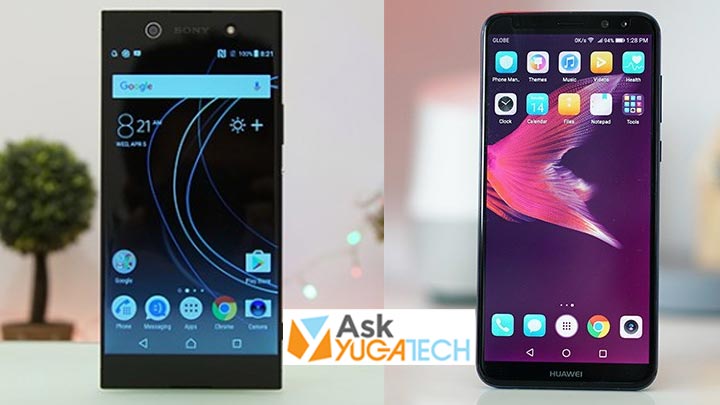 In this matchup, we will be looking at two mid-range smartphones with large screen sizes. Which do you think would have the upper hand in terms of specs? Read on to find out!

The Sony Xperia XA1 Ultra has been around since mid-2017 and is one of the mid-rangers with large phone and screen sizes. It has a 6″ Full HD IPS LCD display with 1920 x 1080 resolution, a MediaTek Helio P20 processor, 32GB/64GB internal storage, 4GB RAM, a 23MP Hybrid Auto-Focus (AF)  rear camera with LED flash, 16MP AF front camera, and 2,700mAh with Qnovo Adaptive Charging.

Both smartphones can provide good viewing experience due to their large screen sizes, however, the Nova 2i’s 18:9 screen aspect ratio makes it more attractive for users who are fond of watching videos.

We have tested both smartphones using benchmark applications like AnTuTu and it turned out that their performances are close to each other. The Nova 2i, however, has a slight upper hand with CPU performance. In terms of gaming potential, the Xperia XA1 Ultra is the better pick since its Mali-T880 MP2 GPU is better than the Nova 2i’s Mali-T830 MP2.

The Xperia XA1 Ultra has single camera lenses in the front and rear while the Nova 2i has dual rear and front cameras which is used for image depth effects. The former has a higher rear and front main camera resolution, but we all know it’s not all about the number of pixels. We have sample shots from both smartphones which can be found here: (Sony Xperia XA1 Ultra and Huawei Nova 2i)

The Xperia XA1 Ultra may have a lower battery capacity, but it gave a longer battery life performance compared to the Nova 2i based on our PC Mark battery tests. In addition, it also supports Qnovo Adaptive Charging and fast charging technology. If the users wish to have a longer lasting smartphone, the XA1 Ultra is the better pick for it.

To summarize, if users want a smartphone with better gaming potential and longer battery life, they can go for the XA1 Ultra. If users are looking for a good viewing experience with a better CPU performance, they can go with the Nova 2i.

Which smartphone would you pick? Let us know your choice in the comments section below.