Our readers ask, “What’s the difference between the OPPO F5 and F5 Youth? And which one should we get?” 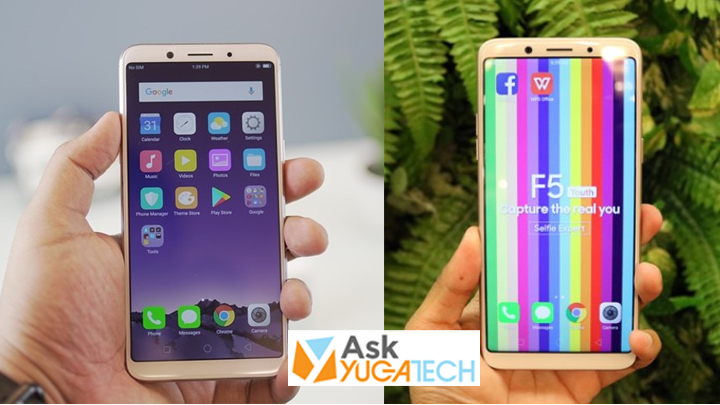 Smartphones with 18:9 displays are trending nowadays and companies like LG, Vivo, Huawei, are on the roll with their mid-rangers. OPPO, on the other hand, has at least two devices with the same feature but with different price tags – the F5 and the F5 Youth. Let’s check out their differences below.

The OPPO F5 Youth, on the other hand, was released recently and can be considered a toned-down model of the F5. It has a 6-inch FHD+ TFT LTPS In-cell display with 18:9 screen aspect ratio and 2160 x 1080 resolution, a MediaTek MT6737T processor, 32GB internal storage, 3GB RAM, 13MP f/2.2 AutoFocus rear camera with LED flash, 16MP f/2.0 front camera with AI Beautification Technology, and 3,200mAh battery.

The two devices have the same display specifications – 6-inch displays with an 18:9 screen aspect ratio and 2160 x 1080 resolution, but with different display types –  the F5 uses an IPS LCD display while the F5 Youth uses TFT-LTPS. Still, both are vibrant with accurate colors and wide-viewing angles which is good for watching movies, viewing photos, or playing games.

Both have the same MediaTek MT6763T or also known as Helio P23 and a Mali-G71 MP2 GPU. For performance, the processor is decent enough to do multi-tasking smoothly. Based on the AnTuTu benchmark scores, they are sitting at above the 60k mark which is a good number for a mid-ranger. The devices can also handle graphics-heavy games such as Asphalt 8 and Iron Blade. Users can enjoy playing even at the highest settings, but be wary that it won’t be a smooth experience due to its fps sitting at 30-50 only.

OPPO has implemented a new technology called AI Beautification on the front cameras of both the F5 and F5 Youth. It analyzes more than 200 facial points and adjusts the beautification to an almost accurate amount for selfies to be more smooth than usual. The F5, however, has a higher rear and front camera resolution and a larger aperture compared to the F5 Youth. Check out our sample photos for the F5 here and F5 Youth here.

Another similarity is the 3,200mAh capacity. In our video loop test, the devices performed similarly with the F5 lasting for 14 hours and 46 minutes while the F5 Youth is at 14 hours and 28 minutes.

The F5 and F5 Youth are practically identical when it comes to overall performance since they both have the same chipset and battery. The F5 has a larger RAM but the 3GB on the F5 Youth is still good for multitasking. The cameras are different as well with the F5 having the upper hand in terms of resolution, but both have A.I. Beautification Technology which is not bad.

The OPPO F5 is priced at Php15,990 while the OPPO F5 Youth is priced at Php13,990. If users are not that picky about having lower camera resolution and smaller RAM, then they can go with the F5 Youth for a cheaper purchase. But if you can stretch the budget, go ahead and get the F5.

Which smartphone would you like to have? Let us know your thoughts in the comments section below.

How to use the Globe at Home app (Postpaid and Prepaid)

How to Send Load and Promo from Globe to TM