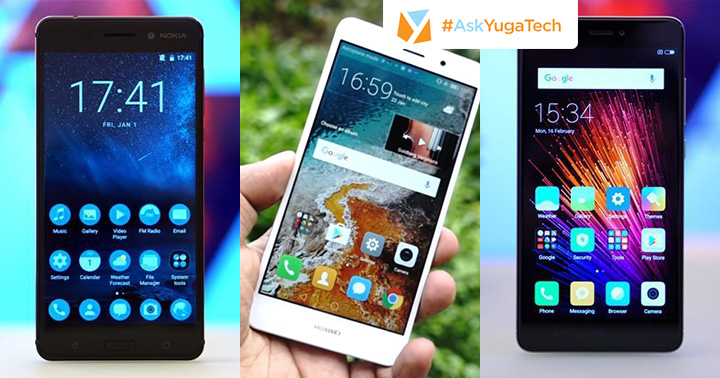 This is another three-way battle between different reputable smartphone brands.

The Nokia 6 is one of the top contenders in mid-range smartphones. It has a 5.5” IPS LCD display with 1920 x 1080 resolution, a Snapdragon 430 chipset, 64GB internal storage, 4GB RAM, 16MP Phase Detection Auto-Focus (PDAF) rear camera with dual-tone flash, 8MP front camera, and a 3000mAh battery to power up the smartphone.

The Xiaomi Redmi Note 4X is one of our readers’ favorites in terms of choosing a good mid-tier smartphone. It has a 5.5“ Full HD display with 1920 x 1080 resolution, a Snapdragon 625 chipset, 32GB internal storage, 3GB RAM, 13MP PDAF rear camera with dual-LED flash, 5MP front camera, and a whopping 4100mAh fast-charging battery to power up the smartphone.

Here are each smartphone’s advantages:

Below is a detailed comparison for each specs department.

+ All have the same Full HD resolution.

+ Nokia 6 has the largest internal memory and RAM.

= Nokia 6 and Huawei GR5 2017 has the same camera quality in terms of Megapixel value.

= Nokia 6 and Xiaomi Redmi Note 4X both have dual flash.

These 3 smartphones are all good mid-tier devices. The Nokia 6 has a solid build quality and has balanced specs. However, it fell short in the CPU department receiving the lowest chipset among the 3, but it makes up for its internal memory and RAM advantage.

For the Huawei GR5 2017, it is notable for having a dual-rear camera which definitely produces good quality images but it fell short in the battery department. It does not have any fast charging if compared to the other 2 smartphones which have fast-charging capabilities.

As for the Xiaomi Redmi Note 4X, it has the best performing CPU and GPU which make up for its lesser internal memory and RAM than the Nokia 6. It also has the upper ground with its 4100mAh battery.

How to transfer load from Sun to Smart?

Got the Nokia 6
First off the processor is pretty good. I hardly noticed any lag. People commented about how it’s an old Snapdragon 430 but the 3GB of RAM is helpful and unless you’re into really intense expensive gaming this is a non issue. It also runs stock android. I’m coming from a Nexus 6 so the transition was seamless. Also I activated developer options so it’s even optimizer further. It’s true that it’s built like a tank. Very nice looks. It has a premium feel. 2 gripes though. Fingerprint scanner should be clickable and placed higher. White one looks really really good I should have gotten that instead of the blue one.