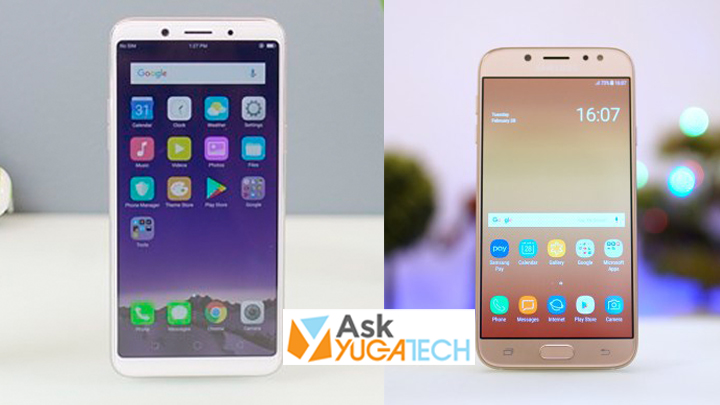 After the OPPO F3, the company’s latest camera-centric smartphone, the OPPO F5, is now put side-by-side to the Samsung Galaxy J7 Pro to see which device has the upper-hand in certain key aspects. Which device will win? Let’s check it out!

The OPPO F5 launched last year as the company’s front liner in the smartphone battle. It has a 6-inch Full HD+ display with 2160 x 1080 resolution, a MediTek Helio P23 processor, a 32GB internal storage, a 4GB RAM, a 16MP rear camera with LED flash, a 20MP camera with AI beautification technology, and a 3,200mAh battery.

The F5 provides a larger screen size and a higher vertical resolution than the J7 Pro. In terms of viewing experience, the point definitely goes to the former since users will enjoy watching videos on a larger display.

While the F5 is equipped with a high-tier mid-range processor, the J7 Pro only has an Exynos 7870 that belongs to low-tier mid-range smartphones. Upon being tested in AnTuTu’s benchmark, we found out that the difference is significantly high. The former performs better than the latter which means that users should already know what they will pick if they want a faster device in their hands.

As for the GPU, the Mali G71 gives a better gaming potential than the Mali-T830 one making the F5 a better pick when playing games.

The F5 has a higher rear and front camera resolutions but the J7 Pro has a wider aperture on both sides. We have previously faced the latter with the OPPO F3 in our comparison video. As for the former, here are our sample shots for the device. (OPPO F5)

When the battery performance of both smartphones w put to the test, the J7 Pro stood out having a much longer battery life than the F5. This means that users who want to have a smartphone with a long battery life can choose the J7 Pro.

The OPPO F5 and Samsung Galaxy J7 Pro are both priced at Php15,990 (SRP). In terms of specs and benchmark scores, it is clear that the F5 is more worth the purchase than the J7 Pro.