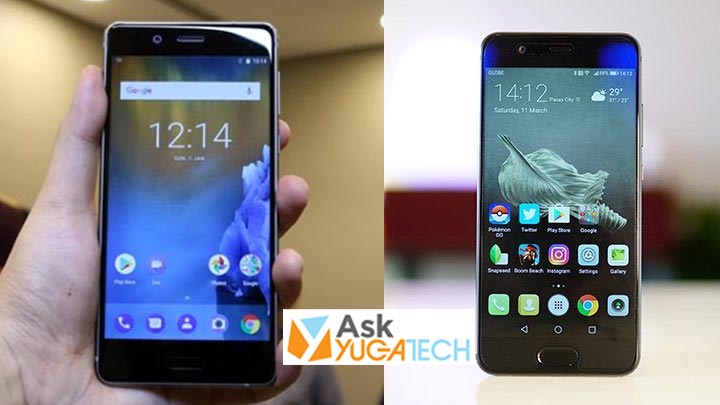 In this match, we will look at both flagship smartphones from two brands which have a good reputation for their quality. Let’s go!

Now, let’s take a look at their detailed specs:

In terms of display, Nokia 8 has the upper hand with its 5.3″ screen size and 2560 x 1440 resolution compared with the P10’s 5.1″ screen size and 1920 x 1080 resolution. A smartphone with a higher resolution and screen size means that it will draw more power from it but at the same time, it will provide users a better viewing experience.

For the CPU and GPU department, the flagship chipset from Qualcomm gives more juice and performance power compared with the Kirin one. The Snapdragon 835 is the company’s most powerful chipset so far which means that the Nokia 8 will have a faster processing speed than that of the P10 Kirin 960 chip. We would like to compare the Huawei Mate 10 which carries the Kirin 970 chipset, however, their price difference is bigger than that of the P10. Don’t get us wrong, both chipsets from the smartphones are the top-tiers which mean they perform daily task easily. As for the GPU, the Adreno 540 GPU puts up more gaming potential than the Mali G71 MP8. If we get our hands on the Nokia 8, we will further show the readers what we mean by checking its benchmark scores.

As for cameras, both have good camera qualities and features. The Nokia 8 has a “Bothfie” camera feature wheren users can use the rear and front camera at the same time. See sample photos here. Its camera lenses are powered by the Carl Zeiss technology, a popular manufacturer of producing lenses for photographers. The P10’s camera is equipped with Leica lenses which already proved its quality back when its predecessor, the P9, was released. See sample photos here.

For overall performance, looking at their raw specs, it is shown that the Nokia 8 wins in this aspect but we should not underestimate the P10’s performance as well.

Let us know your thoughts in the comments section below!

How to Send Load and Promo from Smart to TNT

Is the Zenfone 3 overpriced?